Equion Energia, Amey and RBS were among the most active companies in the English Courts in 2016, according to The Lawyer Court Rankings 2016.

Colombian oil and gas company, Equion Energia tops the rankings after accumulating 63 days in court last year. The former BP subsidiary spent 62 of these days in the Technology and Construction Court defending a class action brought by Colombian farmers who were seeking damages caused by the construction of the Ocensa oil pipeline.

The second most active company in 2016 was Amey. The infrastructure support company was involved in three cases, which spanned 49 days. Two of these cases involved disputes with public authorities – Birmingham City Council and Cumbria County Council. 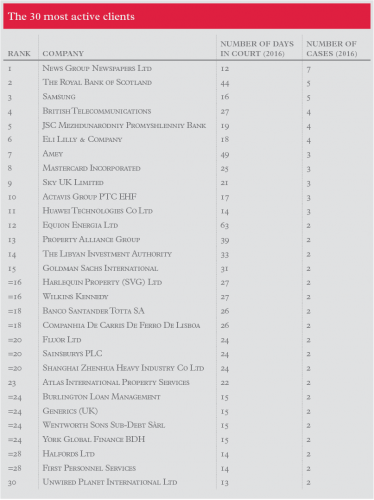 Also spending a large amount of time in court last year was the Libyan Investment Authority. The sovereign wealth fund spent 33 days in court across two cases, while British American Tobacco made 32 appearances across one case.

The Lawyer Court Rankings 2016 also recorded which companies were involved in the largest number of cases. According to the rankings, News Group Newspapers comes out on top, having been involved in seven cases which spanned 12 days.

For more information on the Litigation Tracker, or to purchase the Court Rankings report, contact Richard Edwards on richard.edwards@centaurmedia.com or 020 7970 4672

The post RBS, Equion Energia and Amey most active companies in UK courts appeared first on The Lawyer | Legal News and Jobs | Advancing the business of law.