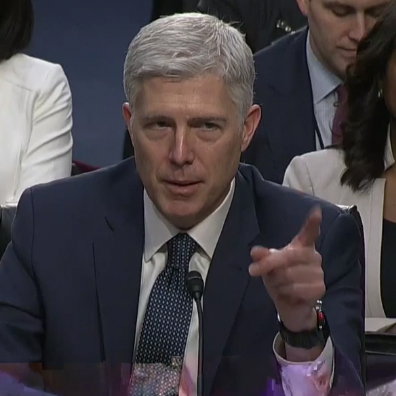 Gorsuch said a good judge entertains all arguments by all parties. But the law that governs is what Congress passes, Gorsuch said. “Everything else that is stitched around it is not law,” though it may have persuasive value, Gorsuch said.

Gorsuch said there are due process and fair notice considerations. We assume it is reasonable for people to be aware of all 5,000 federal criminal laws that have passed. Is it also reasonable to assume they are aware of all floor statements about the laws? Gorsuch asked. Is that due process?

11:51 a.m. ET. Durbin said Gorsuch had participated in 52 opinions on the Sixth Amendment right to effective counsel, and Gorsuch did not find a violation in any single case.

Do you believe that the Sixth Amendment right to counsel is fundamental? Durbin asked. Gorsuch replied that the Supreme Court had recognized it is in Gideon v. Wainwright.

Gorsuch discussed the Strickland standard for reversing convictions because of ineffective counsel. There must be both ineffective assistance and prejudice, Gorsuch said. Sometimes the first prong is met, but the second is not, Gorsuch said.

Durbin asked about a case in which the defendant turned down a 10-year plea deal because of incompetence of counsel. Gorsuch wrote a dissent finding no ineffective assistance because the defendant nonetheless received a fair trial.

Durbin said the Supreme Court “clearly decided that you were wrong.”

11:44 a.m. ET. Sen. Dick Durbin, D-Ill., said Gorsuch had found against students with disabilities in eight out of 10 cases involving the Individuals with Disabilities Education Act.

Gorsuch said the opinion was handed to him this morning as he was headed to the bathroom.

Gorsuch said he was bound by 10th Circuit precedent on the standard, and it didn’t mean he liked the result.

11:19 a.m. ET. Gorsuch spoke about his role as judge. It is his job, Gorsuch said, to respect the boundaries of the legislative branch and not legislate through the cloak of a judicial robe. Judges make very poor legislators, Gorsuch said.

Gorsuch disagreed. “I know there is great pessimism about our government,” Gorsuch said. “I think this body still works.”

“For you to do your job,” Gorsuch said, “it’s important that I don’t do your job.”

11:15 a.m. ET. Gorsuch responded to a question by Hatch about his work in the Justice Department. He supervised civil lawsuits involving the United States as his client, and he held the role of advocate.

“As a judge, you put that aside,” he said. There is just one client—the law, Gorsuch said.

11:10 AM ET. Sen. Orrin Hatch, R-Utah, turned to the issue of Chevron deference.

Do you think your writings reflect a knee-jerk reaction against common-sense regulations? Hatch asked. No, Gorsuch replied.

Gorsuch went on to explain. He said that Section 706 of the Administrative Procedures Act says courts are expected to defer to factual findings of agencies. And we do, Gorsuch said.

But courts have created a doctrine that says, if there is any ambiguity in the law, the agency gets to make the decision about what the law means, Gorsuch said. And Gorsuch said he has questions about that and whether it is compatible with the plain language of Section 706.

If the law can change so easily without legislative action, where is the due process to the individual? Gorsuch asked. How is the individual supposed to figure out the law? And what about equal protection problems when an agency is allowed to pick and choose its targets? And what about the separation of powers? “I thought judges were supposed to say what the law is,” Gorsuch said.

Gorsuch noted the clause “sat in a rather dusty corner for a long time” but it has received lots of attention recently. He also said it is the subject of ongoing litigation, restraining his ability to comment. Several prominent scholars have filed suit claiming payments by foreign powers to President Trump’s companies violate the clause.

10:50 a.m. ET. Leahy turned to President Trump’s travel ban. Does any president have to comply with a court order? Leahy asked.

“That’s the rule of law in this country,” Gorsuch said. Presidents say things and then judges decide, and that’s the way the system works, Gorsuch said.

“You better believe I expect judicial decrees to be obeyed,” Gorsuch said.

10:46 a.m. ET. Sen. Patrick Leahy, D-Vt., asked Gorsuch whether he would recuse himself in cases involving Philip Anschutz, a billionaire and former client of Gorsuch’s who had continuing ties to the judge. He had recused in cases tied to Anschutz on the 10th Circuit.

Gorsuch wouldn’t commit. He said he would have to study the law and the process at the Supreme Court.

10:36 a.m. ET. Gorsuch said he is happy to be called an originalist, but he worries about the use of labels in civic discussion. The term “originalism” doesn’t belong to a party or an ideological wing, he said

Sen. Lindsey Graham, R-S.C., pointed out that Gorsuch has decided more than 2,700 cases and been overturned “once, maybe.”

“I would say that the way you judge has been viewed by the people above you as being acceptable,” Graham said. Despite all of President Trump’s mistakes, Graham said, the president “chose wisely when it came to this man.”

Graham added that he felt President Trump’s criticism of judges was “really out of bounds.” Gorsuch repeated his statement that he takes issue with anyone who criticizes the honesty or integrity or motive of a federal judge.

10:25 a.m. ET. Feinstein said Gorsuch had stated in his book on euthanasia that there is no justification for encouraging the end of life. She noted that California has just passed an end-of-life options act, and she recalled the suffering of her dying father.

Gorsuch said he wrote the book in his capacity as a commentator, before he became a judge. He said he agrees with the Supreme Court’s Cruzan decision recognizing a right to refuse treatment. “At some point you want to be left alone, without the poking and prodding,” he said. Gorsuch also said he endorses anything needed to alleviate pain, even if it unintentionally caused death.

10:15 a.m. ET. Feinstein posed a question about originalism that was submitted to her by a law professor. (“Uh-oh,” was Gorsuch’s original response.)

Do you agree with Justice Scalia’s statement that originalism means there is no protection for gays or women or lesbians under equal protection law? Feinstein asked.

“It would be a mistake to contend that originalism turns on the secret intentions of the drafters,” Gorsuch said.

A good judge, Gorsuch replied, starts with precedent. Judges should also try to understand what the words on the page mean, Gorsuch said.

“No one intends to return us to horse and buggy days,” Gorsuch said.

10:10 a.m. ET. Sen. Dianne Feinstein, D-Calif., questioned Gorsuch about a one-word note involving the indictment of accused terrorist Jose Padilla, written by Gorsuch when he was in the U.S. Justice Department. The note was written on a document that asked if aggressive interrogation yielded valuable information. The handwritten note by Gorsuch said “yes.”

Gorsuch said his memory from 12 years ago was that he was acting as an advocate. Feinstein countered that people who advise have an obligation to find the truth.

9:59 a.m. ET. Grassley noted that the late Justice Antonin Scalia believed legislative history should not play any role in statutory interpretation. Grassley referenced a case in which a defendant was accused of knowingly violating a statute barring felons from possessing guns. The defendant argued he wasn’t guilty because he didn’t know he was a felon.

Gorsuch followed precedent requiring the government need only prove that the defendant was a felon who knowingly possessed a gun. But Gorsuch argued in a concurrence that the precedent should be revisited. The Gorsuch opinion said legislative history was suspect because it contained “artillery.”

Gorsuch told the committee he respects all the work of Congress “and a good judge takes seriously everything you do.” You don’t close your mind to any argument, he said.

But Gorsuch said the plain meaning of the statute seemed to say “knowingly” applied both to the defendant knowing he was a felon and to his knowledge that he possessed a gun.

“So I thought this was a case where the government had to square its corners,” Gorsuch said. The government should not be allowed to put a man in prison based on legislative history that seems to go against the plain meaning of the law, Gorsuch said.

People should not go to prison based on some secret law, he said.

“There is the little guy right there,” Gorsuch added. “He is a criminal defendant, unsympathetic.”

Grassley said the statute balances the interests of children with disabilities with that of the individual school districts, and the balance is a policy judgment made by Congress. Gorsuch said he was bound by precedent in the court’s unanimous decision.

Gorsuch said he has had other cases involving the law in which the student prevailed. “It just depends on the facts and the law of each particular case,” he said.

Confirmation hearings, Day 3: Gorsuch knows ‘how hard’ a judge’s job is. As the Senate Judiciary Committee begins a third day of confirmation hearings for Supreme Court nominee Neil Gorsuch, senators will be able to agree on one thing: the pronunciation of Gorsuch’s name. Gorsuch told senators during a lengthy hearing Tuesday that his name is pronounced “Gore-Such.”

The hearing on Wednesday is scheduled to begin at 9:30 a.m. ET.

On Tuesday, Gorsuch endorsed an independent judiciary, declared that no man is above the law, and took issue with anyone who attacks the integrity, the honesty, the independence or the motives of a judge.

Gorsuch made those comments in response to questions about presidential power and President Trump’s criticism of the judiciary, though he refused to specifically comment on Trump’s judicial criticism.

“I know the men and women of the federal judiciary. I know a lot of them. I know how hard their job is,” Gorsuch said. “And I know how decent they are. And when anyone criticizes the honesty or integrity or motive of a federal judge, I find that disheartening; I find that demoralizing, because I know the truth.”

Gorsuch mostly deflected questions Tuesday about how he would rule in specific cases and about his personal views on issues. His refusal to provide answers led Sen. Mazie Hirono, D-Hawaii, to complain that Gorsuch had been less forthcoming than other nominees.

He was noncommittal when Sen. Dianne Feinstein, D-Calif., referred to to Roe v. Wade as a “super-precedent” and asked Gorsuch if he viewed the opinion that way. Gorsuch replied that Roe has been reaffirmed many times.

He said he couldn’t answer a “politics question” when Sen. Sheldon Whitehouse, D-R.I., asked whether a group planning to spend $10 million to support Gorsuch’s confirmation should have to disclose who contributed to the group.

And Gorsuch laughed when Sen. Patrick Leahy, D-Vt., asked how he would have ruled in the Supreme Court’s Shelby County case, which struck down a provision of the Voting Rights Act. “Senator, I admire the various ways—you would be a formidable companion in the courtroom,” Gorsuch said.

Gorsuch did discuss the context of several cases in which his rulings raised concerns among Democratic senators.

Gorsuch said a focus on his ruling against the worker in the case ignored the body of his work, including many rulings where he did rule for the little guy. “I’m a fair judge,” Gorsuch said. “I can promise you absolutely nothing less.”

Gorsuch also said an opinion he wrote questioning the doctrine of Chevron deference—which holds that federal courts should defer to federal agency views—was a case based on unique facts. The case concerned a bureaucracy overturning judicial precedent without an act of Congress, Gorsuch said.

Gorsuch said the case reminded him of Lucy picking up the football at the last minute so Charlie Brown couldn’t kick it.