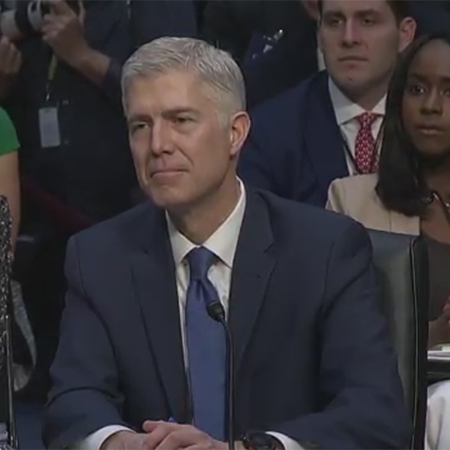 12:38 p.m. ET. After a five-minute break, Grassley orders everyone to take their seats for the hearing to reconvene. But Gorsuch is not there. As soon as he arrives, the hearing starts.

1:29 p.m. ET: U.S. Sen. Ben Sasse, R-Nebraska, emphasized the job of judges to dispassionately apply the facts and the law in a particular case. He saw the judicial robe as emblematic of the cloaking of judges’ personal preferences and political views.

As all of us learned in Schoolhouse Rock, Sasse said, the judiciary is a co-equal branch of government and the role of a Supreme Court justice is sometimes to uphold the Constitution and thwart the majority.

He noted that Donald Trump had pledged during the campaign to appoint a judge in the mold of Justice Antonin Scalia. Franken said he wanted to find out how Gorsuch was similar to and different from Scalia, and said one possible difference was in the area of Chevron deference, in which judges defer to federal agency views.

Scalia had supported Chevron deference, while Gorsuch has questioned it, Franken said.

Chevron deference is the what stands between federal agencies and the so-called deconstruction of the administrative state endorsed by presidential adviser Stephen Bannon, Franken said.

1:08 p.m. ET. U.S. Sen. Ted Cruz, R-Texas, said judges have a more modest role than the left embraces. Judges are supposed to interpret, rather than make, law, Cruz said. If Republicans had allowed Obama to fill the seat of the late Justice Antonin Scalia, there would have been a “profound and troubling shift” on the court, he said.

During the campaign, Donald Trump had promised to appoint judges in the mold of Justice Antonin Scalia and issued a list of 21 people from whom he would pick. That gave Americans a clear view of Trump’s choices, and the American vote embraced Trump’s list, Cruz said.

Gorsuch has “a super legitimacy,” Cruz said, “because of this unique and transparent process, unprecedented in the nation’s history.”

There wasn’t even a “whisper of disapproval” when Gorsuch was approved to be a judge on the Denver-based 10 U.S. Circuit Court of Appeals, Cruz said. Now Democrats are trying to “slander judge Gorsuch” as being “against the little guy,” and that is “absurd,” Cruz said.

Cruz also asserted that Gorsuch should not be asked during the hearings to defend the president who appointed him. Such queries would be “inappropriate political questions that have nothing to do with the record of the nominee before this committee,” Cruz said.

12:58 p.m. ET. U.S. Sen. Amy Klobuchar, D-Minnesota, noted instances of discrimination and asserted that “the pillars of our democracy and Constitution are at risk.”

Senators want to know what Gorsuch will do on the court, she said. She noted a speech in which Gorsuch said legislators look to their own moral convictions in shaping laws, while judges should strive to apply the law as it is, looking to text, structure and history.

“I want to understand better those views of the Constitution and how they square with modern life,” she said.

12:47 p.m. ET. U.S. Sen. Lindsey Graham, R-South Carolina, said Gorsuch is the best choice available to a Republican president in terms of someone who is going to keep the conservative philosophy alive and well.

Graham said Gorsuch is highly qualified, and that is what senators should be evaluating. Gorsuch had issued 2,700 decisions and he has been overruled just once, Graham said.

Graham also defended the decision not to hold hearings on President Obama’s Supreme Court nominee, Merrick Garland. He said Democrats would have also refused to act, had the tables been turned.

Graham said he had voted to confirm the Supreme Court nominations of Samuel A. Alito Jr., John G. Roberts Jr., Sonia Sotomayor and Elena Kagan because he thought all were qualified. Confirmation hearings, as they are held today, are “going to destroy the judiciary over time” if the Judiciary Committee does not return to prior days when senators judged qualifications, he said.

The Republican political industrial complex uses amicus briefs to tell Republican appointees on the court what it wants, Whitehouse said. “It’s kind of a machine,” he asserted. Special interests fund front groups that appear as amici, the court rules based on those arguments, and the special interests get more money to fund the front groups, he said.

Studies show the court is the most corporate-friendly court in modern history, Whitehouse said.

Some senators will likely claim Gorsuch is outside the mainstream because he is an originalist, Lee said. But even liberal Justice Elena Kagan, during her confirmation hearings, said judges try to interpret the framers and in that way, all are originalists, Lee said.

Some may complain that Gorsuch is refusing to state how he decides future cases. In his view, Lee said, that is a reason to vote for, not against, confirmation. Nor should Gorsuch’s judicial record be interpreted based on who won and who lost, Lee said.

12:17 p.m. ET. U.S. Sen. Dick Durbin, R-Ill., noted that some Republicans are saying politics should not play a part in the confirmation process. But Gorsuch’s nomination is part of a Republican strategy to capture the judicial branch of government, Durbin said.

Durbin said the Roberts court has expanded its rulings on behalf of corporate America. The court has held that corporations have the same rights as people to spend money on elections and to assert religious objections to withhold contraceptive insurance coverage, he said.

Durbin then cited Gorsuch’s opinions against workers and in favor of corporations.

Durbin also questioned Gorsuch’s involvement, while in the Justice Department, in a presidential signing statement asserting a right to ignore a law restricting the use of torture.

12:06 p.m. ET. U.S. Sen. John Cornyn, R-Texas, said Gorsuch’s jurisprudence “reflects brilliance and humility.” Some senators might ask Gorsuch during the hearings how he will vote in specific cases, but confirmation hearings should not degenerate into such a question-and-answer session, Cornyn said.

Cornyn noted that judges who follow the law and the facts may rule for or against the government, and for or against a corporation. That’s how the law works, and it protects the little guy better than a system rigged to favor one side, he said.

Leahy noted that the present and past nominee differ on judicial philosophy, however. Gorsuch is an originalist, and Leahy said he is worried that originalism is an agenda rather than a philosophy.

Leahy said he has yet to decide how he will vote on the nomination. He says Gorsuch, if confirmed, should be a justice for all of America rather than a justice for the special interests of a few.

11:47 a.m. ET. In his statement to the committee, Sen. Orrin Hatch, R-Utah, criticized opponents of Gorsuch who “seem to think the confirmation requires a political agenda and a calculator.”

The opponents tally the winners and losers in past cases decided by Gorsuch and do the math. If they don’t like the results, they oppose confirmation, he said.

Hatch advised Gorsuch to resist efforts to compromise his impartiality by pledging to adhere to litmus tests to decide future cases.

11:40 a.m. ET. In her opening statement, U.S. Sen. Dianne Feinstein, D-Calif., said the hearings were being held because the U.S. Supreme Court has the final word on hundreds of issues that impact our daily lives.

Those issues, Feinstein said, include a woman’s right to control her own body, health care, the influence of money in elections, voting rights, the environment, gun rights and worker protections.

Feinstein referenced the so-called frozen trucker case, in which Gorsuch wrote a dissent finding that federal law did not protect a trucker who abandoned his disabled trailer to find help during cold weather. She also spoke about a Gorsuch opinion questioning Chevron deference, a doctrine that holds that federal courts should defer to federal agency views when Congress passes ambiguous laws.

Among the consequential issues, she said, is Roe v. Wade establishing the legal right to abortion. “The debate over Roe v. Wade and the right to privacy, ladies and gentlemen, is not theoretical,” Feinstein said. Gorsuch has not ruled on a case involving Roe, but Gorsuch’s writings on the taking of a human life have been interpreted to mean he would vote to overturn Roe, Feinstein said.

Feinstein also criticized Feinstein’s view that judges should look to the original public meaning of the Constitution when they decide meaning. “In essence, it means that judges and courts should evaluate our rights and privileges as they were understood in 1789,” she said. This “limits the genius of what our Constitution upholds,” Feinstein said.

In his opening statement, Grassley quoted the late Justice Antonin Scalia on the importance of separation of powers, which gives power to the Bill of Rights. “The most important feature of our Constitution is the design of the document itself,” he says. This structure “protects against the mischief that results against the concentration of political power,” he said.

Judges play a “crucial but limited role” in resolving cases, Grassley said. Judges are not free to rewrite statutes, to reorder regulations or to rewrite the Constitution, he stated.

Gorsuch’s body of professional work displays an unfailing commitment to the principles of separation of powers and judicial independence, Grassley said.

Gorsuch appeared to close his eyes briefly when Grassley discussed a Supreme Court decision against the Obama administration and occasionally took notes. He nodded when Grassley spoke about some of his prior writings.

Gorsuch laughs as photographers crowd in to snap his photo.

The hearings, which will be broadcast live at this PBS website, are expected to last four days.

Gorsuch, a judge on the Denver-based 10th U.S. Circuit Court of Appeals, was nominated to fill replace Justice Antonin Scalia, who died in February 2016. President Barack Obama’s nominee, Judge Merrick Garland of the U.S. Court of Appeals for the D.C. Circuit, never received a confirmation hearing.

Gorsuch has received a well-qualified rating from the ABA’s Standing Committee on the Federal Judiciary. He is known for strong academic credentials, clear writing and an originalist philosophy that puts him in the mold of Scalia. In announcing the nomination, President Donald Trump cited bipartisan support for Gorsuch when he was nominated to the 10th Circuit.

Some Democrats have indicated they may oppose Gorsuch. In a press conference last week, Senate Minority Leader Chuck Schumer, D-N.Y., said he has “a strong presumption against” confirmation, report Bloomberg Politics and Reuters. “Judge Gorsuch may act like a neutral, calm judge, but his record and his career clearly show he harbors a right-wing, pro-corporate, special-interest legal agenda,” Schumer said.

Another issue in the hearings may be Gorsuch’s opposition to the doctrine of Chevron deference, which holds that federal courts should defer to federal agency views when Congress passes ambiguous laws. His views on the issue differ from that of Scalia, who had argued that judges are less capable than regulators in interpreting laws.

Sen. Sheldon Whitehouse, D-R.I., said last week that Democratic resentment over Garland’s failed nomination may also be a factor. Gorsuch “does not come into this with the benefit of the doubt in his favor,” Whitehouse said. Democrats must see that he is “a true judicial conservative and not a political conservative.”