Poll: Which caption do you find most appealing? 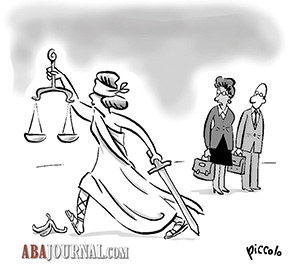 We had more than 130 entries to caption this month’s cartoon—and readers really did it justice. Now it’s your turn to decide on the best caption. The caption with the most votes will appear in an upcoming issue of the magazine.

• “I predict a split decision.” —Submitted by Albert W. Wallis of Boston

• “I never thought I would get to witness blind justice on appeal.” —Submitted by Frank M. Kocs of Paso Robles, California

• “Now we’ll finally know if she peeks under her blindfold.” —Submitted by Robert Guinness of St. Charles, Missouri